Should Marijuana Be Legalized? | Pros and Cons of Legalizing Medical and Recreational Marijuana
Take a tour of the Aurora Cannabis production facility (in 4K)
Florida medical marijuana debate (Part 1)
How to get a Medical Cannabis Card in Florida!! Quick and easy!!
(OFFICIAL) Macka B – Medical Marijuana Card Liz Kennedy, a 34-year old TV host and entrepreneur, was born in New York to parents with very different backgrounds. Her mother, who was Ashkenazi, divorced her father, a Moroccan Israeli, when she was six years old.

“My parents were very opposite human beings. I know it sounds weird, but there was a lot of jealousy on my dad’s part towards my mom. My mother was educated and sophisticated. My father was a street kid from Morocco. I saw my mother endure a lot of emotional and physical abuse. Because of this, so much of my childhood was stolen from me. At the same time, the trauma made me who I am.”

Liz grew up with a lot of Jewish tradition, but her mother was traumatized from the divorce and left most of their traditions behind. She was heartbroken, but managed to single-handedly raise her two daughters on a teacher’s salary. She kept pushing forward.

“I believe that people who have trauma go in one of two directions. Some people play the victim. They are always between jobs and can’t move forward. I chose to use trauma and self-care to push forward.” 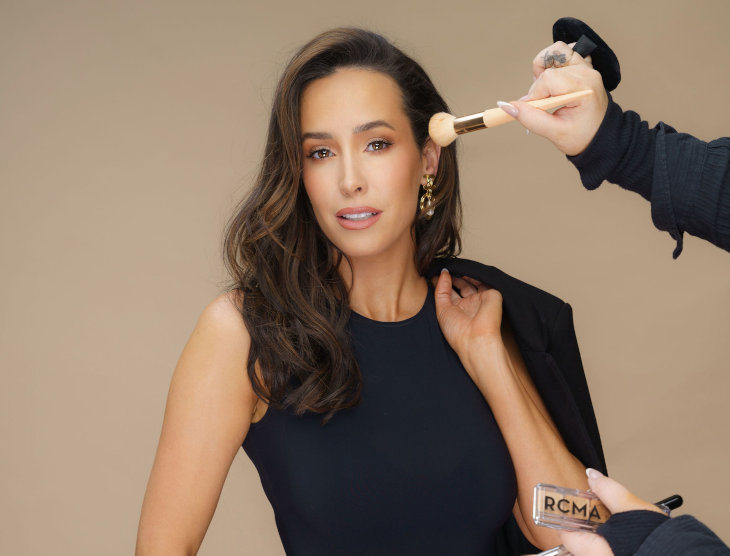 Liz went to college in South Florida where she stood out. “All the girls were super blonde and Christian, and there I was, the token brunette Jew!” She eventually moved to Brooklyn but did not connect with her father, who lived in Israel, until she was 21.

“I decided to take a trip to Israel. This was before Instagram, and I had this impression that Israel was just a desert with one camel. I went without anyone knowing. I met my father there and was supposed to stay for a week. But I fell in love with the country. I didn’t want to leave, but I had so much unfinished business in America, I had to come back.”

Instead of staying, Liz brought the spirituality of Israel back home with her. She brings this same spirituality into her work today. “Skin covers our body, soul, and spirit. It is so much deeper than people perceive it to be. Skin is the largest organ, it protects us. It has millions of nerves. To me, it is the most fascinating part of the body.”

Liz’s mother was too caught up in the struggle of making ends meet to care about how she looked, but Liz has loved beauty since she was a young girl. “I was always obsessed with skin. I loved watching the way skin heals. I loved creams and lotions, and I always thought I would work with a plastic surgeon.

“I woke up one day and thought, I need to become a licensed esthetician. People gave me such negative feedback, like, ‘Don’t you think you’re smarter than that?’ I think skin care is more than just physical; it’s emotional and spiritual. The biggest issue is that women do not take time for themselves. You can actually manipulate the way you perceive yourself.”

Liz began earning her license and simultaneously worked with a plastic surgeon and dermatologist. At that point, she was also regularly offered random TV slots, teaching people about skin and beauty. “I fell in love with the educational aspect.”

While Liz was working in television, she would listen to what women complained about. They would say things like, “I have so much stuff in makeup bag and I can’t find what I need. I’m already overwhelmed. I just need something quick and easy.” 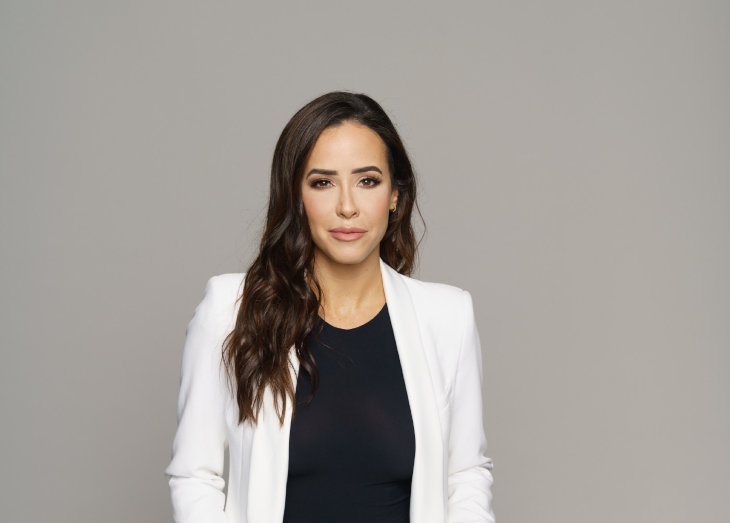 Liz had an aha moment and realized she wanted to create a product that was several tools in one. Thus, Beauty Magnet was created. Beauty Magnet is a five-in-one tool for women to incorporate into their daily beauty routine.

“It’s the Swiss Army knife for women. Everything in one.”

Liz believes women need to take ten minutes a day and respect themselves by giving time to their face. “My product is really more of a lifestyle brand than just a product. While you’re doing your routine, we will teach you how to become more magnetic. It’s quick, it’s easy, it’s to the point. It’s an all-in-one tool that is aesthetically pleasing, and it maximizes the woman’s time.”

Liz has been featured in Forbes magazine, a dream she had since she was a child.

Why can’t I be super smart and driven and also care about myself and my looks?

“Some girls dream about getting married. I wanted to be on the cover of Forbes. Today I want to be the girl that I needed when I was younger. I was always told skin care is stupid and beauty is stupid. My mother always told me, ‘You should be focused on being smart.’ I just kept asking, ‘Why can’t I be both? Why can’t I be super smart and driven and also care about myself and my looks?’”

Raising her first million dollars in equity was her biggest challenge.

“I was pregnant, and then had postpartum depression. I had no job because it was COVID, and TV networks were down. So I transitioned to social media. I thought, How am I supposed to raise this money? I was in a really dark place.

“I would meet with investors, some of whom were men, with the hopes of gaining their investment. Turns out, they just wanted to take me out, shoot the breeze, and waste my time. It was infuriating. I had to slowly weed out who was looking to be seen with me and who was interested in investing. I also decided to look at life like a numbers game. Eight out of ten will waste your time. One will be interested but won’t bite, and then you hit the one person who makes it all worth it.”

The first investments came in slowly, but it became easier over time. Today, Liz has partnered with two Muslim investors. “They are incredible guys. They believed in me, and the product.” 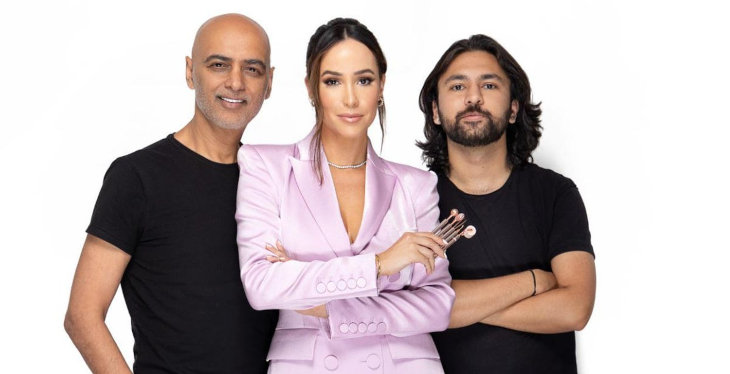 Liz knows that her tools help any skincare routine work more effectively, but more importantly, they also force the users to slow down and take time for themselves. For example, the eye roller cools the skin around the eyes, but you have to go in soothing motions, which relaxes the nervous system and calms the brain.

In her personal life, two Jewish values that are very important to Liz are food and family. 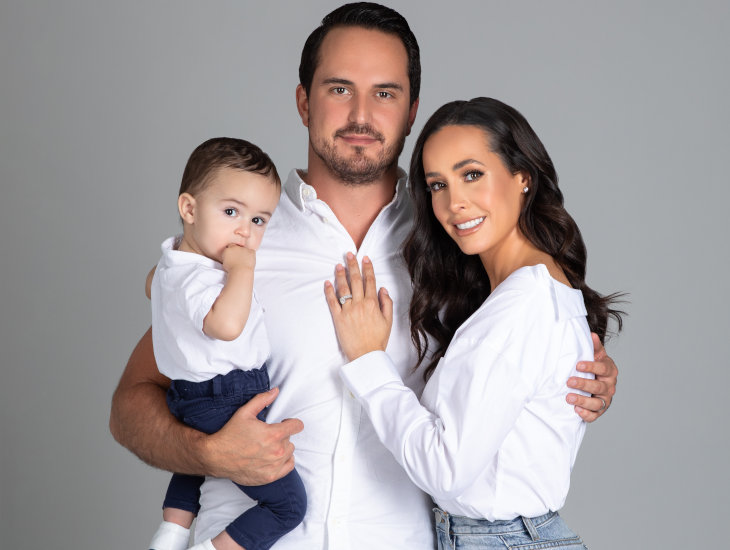 “My husband and I have been together for ten years. He is incredibly patient and, kind and his love of Judaism is infectious. My son is three, and is the most delicious thing in the entire world. He has changed my perspective, and made me more whole. I went to Israel in July with him for three weeks. We combined food and family, because we were together and eating at all the amazing restaurants. I was super emotional because I hadn’t been in so long. Being there with my son brought it all full circle.”

Liz finds that her son is her greatest source of inspiration. “My son is the coolest. He brings out a different side of me, and yet he’s so much like me it’s frightening. We have so much fun together. I find myself laughing and snorting and feeling dorky, but enjoying the moment.”

Her personal goal is to foster a home life where everyone has a soft and relaxed energy. She came from a broken home, and never wants that in her own family. This atmosphere is what she wants to help establish for every woman regarding beauty.

“I talk about spirituality and self-esteem in a way that’s not pushy or in your face. The body, mind, and soul are connected. Taking care of yourself is part of spirituality. Beauty is about being magnetic.

“My mom was single, and growing up we didn’t have a lot, especially compared to the kids that came from dual-income backgrounds. Despite it all, I always had a certain level of confidence. I was self-aware. I was aware of my flaws and aware of what I loved about myself. As I got older and came into my body, I realized most women don’t even have that baseline.

“That’s where I step in. I can be that voice of reassurance that women need. This is my calling. Women need to take time for themselves and create balance.”

Liz believes that beauty is in the eye of the beholder. “Your goal should be to look like yourself. You want to look like the best and most natural version of you. When women tell me that they hate aging and all they see are the lines, I tell them, ‘I see it, too. But I feel more attractive and confident at my age now than I ever did at a younger age.’ I want women everywhere to start thinking that, too. Nothing is more beautiful than a confident, older woman who has it together and takes care of herself.”

One of the best parts of Liz’s professional life is meeting interesting and amazing people.

“I’ve worked with many people from the Black community, like Nick Cannon and Steve Harvey. I feel like a lot of Black people don’t realize how similar the Jewish and black communities are. People often think I am Latina at first. ‘Oh, she’s dark and spicy, she’s Latina.’ But then when I tell them I am Jewish and Israeli, they are shocked. Then they see another side of Jewish people, and it’s not what they thought.

“When they ask me, ‘Wait, if you think you are the chosen people, doesn’t that make you better than everyone?’

“I tell them no! We aren’t better! ‘Chosen’ means we have a responsibility—to lead by example, to lead with grace.”

Liz Kennedy has lived a life of perseverance, both personally and professionally. She urges women everywhere to do the same, to push forward while also taking time for themselves. After all, beauty is a state of mind.

Should Marijuana Be Legalized? | Pros and Cons of Legalizing Medical and Recreational Marijuana

Take a tour of the Aurora Cannabis production facility (in 4K)

How to get a Medical Cannabis Card in Florida!! Quick and easy!!